Hashtags: A guide to #success 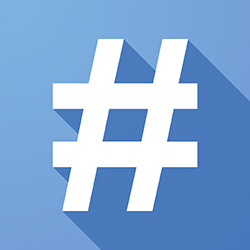 The hashtag. From a straightforward and serviceable way of seeing content around a given event or topic, to finding like-minded people and launching movements, the hashtag has evolved from its “pound sign” origins.

Hashtags help users quickly find your content, connecting you with new people and giving you a powerful way to share your message.

The hashtag was originally used on Twitter in 2007, when early users needed a way to organize tweets. Twitter formally adopted hashtags in 2009. When Instagram launched with hashtags in 2010, their use skyrocketed and rapidly spread to other platforms — even email and print.

LinkedIn was a holdout, discouraging hashtags by making them non-clickable. That began to change this spring, and LinkedIn is now testing a feature that suggests potential hashtags as you type a post.

So how can you use hashtags to your advantage?

DO use multiple hashtags, but not too many.

Linchpin SEO found that tweets with one or two hashtags see a 21 percent lift in engagement compared to tweets with three or more. Tweets or LinkedIn posts with long strings of hashtags can appear spammy.

While it can be tempting to use a top-trending keyword to gain new eyes for your post, think strategically. You risk getting lost in a sea of unrelated content or — worse — annoying potential readers. If you can find a clever way to connect it to your brand in a relevant way, give it a try.

DO invest the time to research what your audience actually searches for.

Conduct several searches of relevant topics to see how your audience is talking about your subjects. You can do this by going to Twitter and LinkedIn and simply searching for your proposed hashtags, then comparing the results. You may discover that #dataquality is used by your audience (and that #DQ is preferred for the ice cream brand).

Think like your audience. They may not want to type in #2018greatbigextralonghashtag, and long hashtags are more prone to typos. Choose the most succinct option that still makes sense, and avoid acronyms or abbreviations that won’t be immediately understood by your audience.

DO weave hashtags directly into your tweets.

This is especially important on character-limited platforms like Twitter. Rather than ending a tweet with several hashtags, use them in the copy itself: “This is how #hashtags should work.” Rather than, “This is how hashtags should work. #hashtags” On LinkedIn, hashtags are usually in a row after the text of your post, where they’re easily searched but don’t interrupt the flow.

If engaging new users is your goal, they’ll never find your invented hashtags. It’s far better to find out what your target audience is already using and use their preferred hashtags. The exception? If you’re launching a well-promoted event, product, or idea. Your hashtag can grow if you use a campaign tagline as a hashtag on print ads, web ads, blog posts, and elsewhere throughout your ecosystem. Likewise, if you’re hosting an event, announce your hashtag and encourage attendees to use it by including it on presentation templates and materials.

DO add hashtags to your LinkedIn Company Pages (and profiles).

Add hashtags as “Specialties” in your About Us section to return in search results. You can do likewise for your personal profile to increase your prominence around key topics. Adding hashtags to your LinkedIn comments on other peoples’ posts can also help boost your profile.

DON’T set it and forget it.

Hashtags are constantly evolving. Don’t choose an initial list of hashtags and make them a permanent fixture of your efforts. Pay attention to how your industry’s preferred hashtags are changing, and adjust accordingly. Set a reminder to do this at least monthly or quarterly.

Hashtags can connect your brand with new people, but you must use them wisely.