Business behavior in a downturn: winners and losers 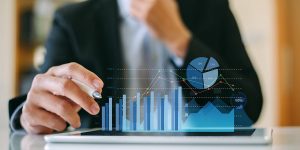 When there is a drop in demand for health care services due to consumer behavior in an economic downturn, the response by many health care organizations is predictable — retrenchment. Certainly for some organizations with revenues that have fallen to levels that threaten the survival of the business, there may be no choice but to severely cut back. But, if resources are available, the arguments in favor of not doing so — at least across the board — are strong.

Headed into the global financial crisis a decade ago, a group of almost 3,900 companies worldwide were run through a sustained value creation analysis by Bain & Company. This group had posted double-digit earnings growth on average, from 2003 to 2007. When the downturn came, performance of these companies diverged sharply. The “winners” grew at a 17% compound annual growth rate (CAGR) during the recession, compared with 0% among the losers. The winners also locked in gains to grow an average 13% CAGR in the years following the downturn, while losers barely grew at all (1%). The takeaway here is that the entire playing field can be uprooted, depending on actions taken by companies during and after a recession.

Winning companies accelerated profitability during and after the recession, while losers stalled

Loser Behavior
Losing companies tended to follow the “recession playbook,” slashing and burning their way to the other side with the hope that extreme cost-cutting would be enough to ensure survival. These companies scaled back on marketing, cut R&D, laid off valuable talent and ruled out acquisitions.

Winner Behavior
Companies that ranked among the eventual winners focused intensively on cost transformation, but they also looked beyond cost. Bain reveals key moves by companies that outperformed peers in four areas:

Less fat, more muscle
All companies must manage costs in a recession. Yet some do this by ratcheting down spending on lower-value processes and reducing the volume and complexity of work. For them, cost management as a way to refuel the growth engine for the next stage in the business cycle.

Balance the check book
The winners worked the balance sheet as strategically as they did the P&L. They tightly managed cash, capital and capex, all to create “fuel” to invest through the cycle. Many companies also explored new ownership models in typically capital-intensive industries.

M&A
For the winners, the last recession presented a window to use acquisitions to reshape the portfolio of businesses or divest noncore assets that didn’t fit strategically in the company’s future.

Play offense
The strongest companies went on offense early, while many of their peers focused on survival. Winners used a few common tactics to boost growth, including maintaining marketing (while competitors cut back) and focusing on improving the customer experience, making it more simple and personalized.

Health care should take special note of play offense, for when economic anxiety goes up, many providers view it as a signal to play defense. In fact, a large body of research studies across industries suggests that this strategy does more harm than good.

To summarize the results of these studies here:

As the Bain study showed, a recession opens the playing field for smart marketers. Health care providers should use the current downturn to reach and attract the patients who are still seeking services, to protect their existing patient base and to build a larger market share overall. While some consumer segments may be spending less, it is always possible to gain new patients. The daily economic doldrums notwithstanding, health care services are mainly based on personal need, and that need is often essential. In fact, the pandemic/recession itself can create demand — research by the American Academy of Family Physicians during the last recession found increases in both patients with major stress symptoms and patients with new health problems that developed due to the skipping of preventive health measures.

Because there will always be people who require health care, there will always be people attuned to health care marketing. In fact, very attuned — at this writing, overall media consumption is going up, increasing a brand’s opportunity to create meaningful, loyal and long-lasting relationships with patients. With most people engaging in some form of stay-at-home living at this writing, total use of television in the U.S. is up (18% in mid-March of 2020 compared with early March, for example). Social content volume is up and daily app usage has increased significantly when COVID-19 spread across the country compared with the first two-and-a-half months of the year.

Even with these changes in media consumption, according to Information Resources, digital media costs have been down ~40% (as of June, 2020); and TV media costs in the spot market have decreased too. While media costs can be mercurial, suffice to say health care marketers that maintain marketing investment have the opportunity to realize both short-term and long-term media price advantage, improving the relative efficiency of their advertising programs. Short-term price reductions are driven by increased supply and lower advertiser demand. Long-term benefit can be realized by the reset of baseline prices in markets where media sellers increasingly value predictable revenue. Additionally, healthcare marketers can leverage and seize opportunities created by the positive consumer mindshare of “healthcare workers as heroes”.

In the last post of this series we will identify ways specific ways for health care providers to seize the opportunity during an economic downturn.